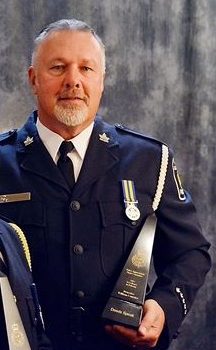 Published on April 9, 2017 | by Austen Demerling     Photography by Mike Barrett

That’s one man’s experience, at least. Bill Courtice has been a police officer for over 30 years, but in 2013 he made the decision to come to the University of Guelph-Humber for a degree-completion program to compliment his prior education. The reason? Personal growth.

“It was something that I had always wanted to do but never pursued,” said Courtice.

York Regional Police, where Courtice works as a detective in the homicide unit, subsidize continuing education through the justice and public safety degree completion program at Guelph-Humber.

He decided to give it a shot when guest speakers representing the school and the program visited York Regional Police. “As I listened to the speakers, I realized that in some regards I had sold myself short … it was at that point where I decided that, you know what, this is something that, at this stage in my life, I’ve got the time and certainly the desire … I’ll push forward with it,” said Courtice.

Bill wasn’t the only working police officer enrolled at Guelph-Humber during his time here. He said it’s common for officers to take these opportunities to reinforce their education – some with the hopes of being promoted in the force.

In Courtice’s case it was more for personal reasons that he regretted not taking his education further before he started policing.

Nitin Deckha teaches two courses within the degree completion program: Canadian Social Problems and Trends in Gender Issues. He taught Courtice, who he said had a good critical eye and a lot of things to say.

Deckha said that the policing community is a strong one and that they make “really amazing students” because “their time management skills are really strong, they’re working full-time and they’re doing the work that they want to do.”

“It’s a natural fit because investigative analysis and critical thought, when done well, are the same thing. Problem solving, weighing evidence, contextualizing large amounts of information – these are needed in both academia and policing,” said Shawna Coxon, another of Courtice’s professors.

Coxon currently teaches two courses called Police and Society and Public Policy, both within the justice studies BAA program. She said that Bill was generous and always shared his experiences with the class, often “in a way that got everyone laughing.”

Courtice said that he has applied some of what he learned at Guelph-Humber in the field since completing the program in 2015. “I think what the course establishes is the ability to think critically about things as opposed to seeing things very one-dimensionally.”

“He certainly made an impression on me,” said Deckha. “He saw the benefit of really re-looking at things.”

Courtice isn’t finished with school just yet. He’s currently working towards earning his master’s in the leadership program at the University of Guelph, and says he hasn’t yet ruled out the possibility of imparting his knowledge onto others after retiring.

“I think he’s still … a curious person,” said Deckha, “and I think that is really a great thing to see, young or old. If people are curious, I think that bodes well for our society.”

Travel can give an edge to students seeking jobs →