Sleep in students: How much is enough?

When Gordon Marshall pulled an all-nighter, he never imagined there being a risk of losing his life.

“I concentrate better late at night, but it wasn’t until I was nearly hospitalized that I realized staying healthy is more important,” Marshall said.

Marshall is a third year justice studies student at the University of Guelph-Humber and he said that falling asleep has always been difficult for him.

“I stayed awake almost every night and then eventually I felt my body crashing down on me. My chest felt like it was caving in and I couldn’t breathe,” Marshall said.

Though Marshall was ready to go to the hospital, he put his computer aside and was able to control his breathing.

Dr. Sunil Bhalla is a nephrologist, focusing on the relationship between kidney health and sleep.

Bhalla said not getting enough hours of sleep leads to detrimental health problems in the future.

“The average person needs seven hours of sleep, that’s the magic number. When you get less hours, you’ll get more problems down the road,” Bhalla said.

He said patients who are deprived of sleep have an increased probability of suffering from strokes, heart attacks and malignancies, particularly breast cancer.

“I find that most students force sleep deprivation on themselves because they think they are being more productive, but it’s actually the opposite since sleep is the fuel that feeds your brain,” Bhalla said.

He said that lacking sleep goes against the body’s natural rhythm and this can be adjusted by using external time cues, like light, sound and other distractions.

“An external time cue is essentially controlling your environment and mimicking what is natural in a not-so-natural setting,” Bhalla said.

Ahmed Tahir, the president of Ignite, said that he introduced the concept of a sleep lounge at Humber College to emphasize the importance of sleep.

The sleep lounge mirrors a natural sleeping environment by ensuring the room is dark to resemble night.

It is pitch black, has five single beds made of a material easy to clean and each bed is separated by folding screens for privacy.

Bhalla said that light is an example of a time cue because it convinces the brain that when it is dark it is time to sleep.

“I would always see students sleeping in random places around campus and so I wanted to create a place that is safe, comfortable and clean,” Tahir said.

He said there have been 976 unique users participating in the sleep lounge with a 93 per cent satisfaction rate from the results of a survey dated Dec. 1, 2016.

“We know that the sleep lounge is needed by measuring its success. We open the sleep lounge at 9 a.m. and we already have students waiting for the doors to open,” said Kimberly Daniels, the services coordinator at Ignite.

Daniels said that they are already beginning to consider spreading the sleep lounge to different areas of the school to make it more accessible.

Marshall said that he uses the sleep lounge on a weekly basis in order to maintain a healthy sleeping schedule.

“I’ve noticed a huge difference in myself this year since they opened the sleep lounge. After my incident, I made sleep a priority by using the lounge and taking better care of my body.”

The sleep lounge is found beside the Ignite office and is available to students from September to April from 9 a.m. to 4 p.m. 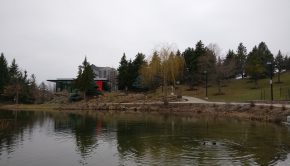 One Response to Sleep in students: How much is enough?