Plant wall makes for a breath of fresh air

“It started with bio-systems and outer space habitation and turned into a bio-filtration technology that cleans the air we breathe,” said the creator of the plant wall, Dr. Alan Darlington.

Darlington, the president of Nedlaw Living Walls said he introduced the idea of a bio-filter plant wall to Guelph-Humber in the early 1990s, which is when he said the design stage started.

He said Guelph-Humber’s plant wall acted as a prototype as it was one of the first and largest bio-filters ever created.

“Since then, we’ve probably done around 300 installations across the world and it all goes back to the University of Guelph-Humber,” Darlington said.

Nedlaw Living Walls worked with Birgit Siber, a principal at Diamond Schmitt Architects, which is the same company that designed Guelph-Humber.

“We were ambitious with Guelph-Humber’s plant wall. Not only is it beautiful, but it is very good psychologically,” Siber said.

“The living wall has to have a value beyond the aesthetics, it has to work. It should be a functional part of the building that happens to look nice too,” Darlington said.

He also said the system actively pulls air through the plant wall where chemicals and formaldehydes are biologically broken down.

“The main challenge with the plant wall is that the maintenance would have been less expensive had there been a regular wall there. The upkeep is certainly something to budget for,” Bragues said.

Brague wouldn’t specify the cost of upkeep but he said despite the maintenance and fees, the plant wall is distinct as it complements the atrium and it benefits our school community by naturally cleaning the air.

Siber also said students and faculty were the deciding factor to include the bio-filter plant wall.

“When Dr. Darlington and I introduced the idea, faculty and students showed a curiosity and interest which really encouraged the university to go through with it,” she said.

Darlington said that Nedlaw Living Walls has developed seven versions of the plant wall over the years and is continuing to innovate new technical aspects to it.

“There are always challenges, but when I’m having a bad day I like to go to Guelph-Humber.” 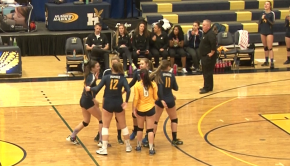