Who has ever said, I have time later. I’ll just finish my work later, or something like that?

This is probably one of the most common sentences that come out of any student’s mouth. This mentality can have a significant consequence for any student but maybe even more so the student athletes at Humber College.

If the athletes do not keep their grades up, it not only results in them potentially failing classes, but also not being able to play for their respective teams.

As a result, Monique Haan, Humber Athletics’ academic coordinator, created the Humber Athlete Mentorship program as a way to help monitor the grades of the athletes.

“We started this about three years ago because we were having a high turnover of students. We didn’t want to keep losing students from semester one to semester two, so we created this as a way for them to be more successful in their academics,” said Haan.

The program pairs student athletes with senior mentors. The mentors help the students apply the skills needed to balance being both a student and an athlete, Gerardo Magno explained.

Gerardo Magno is a mentor who has been through it. Being a member of the men’s soccer team for the last five years means that Magno knows it’s sometimes hard to balance the two.

The mentors are also not just doing this in their free time, but are getting paid for their work. They also are able to put their time on the co-curricular record, which could help them in future references for jobs.

Haan also said that what makes the program unique is that the students are paired with mentors from the same sport.

“Having a mentor who is from the same sport helps tremendously because you have someone who has been through it, and can actually relate with the student,” said Haan.

Magno added,“When I look at the athletes now I see a little of myself in them, where you think to yourself ‘oh I can slack off a bit and finish it later’ but that’s not the case. We need to be on-top of ourselves.”

Tania Serafino is another mentor who has been through it. She was a player for the women’s soccer team and still works as a mentor.

Serafino said the goal is to make sure the students realize the importance of their school work, for example, by constantly reminding the students about time management.

“Most athletes come and just think that they’re athletes and the school work isn’t that important but what we’re trying to make them understand is that they are students first and that’s what’s important,” said Serafino.

Chris Wilkins, head coach of the women’s volleyball team said that he focuses a lot on the importance of time-management.

“It’s no question that their schedules are hectic. They play almost every night so they need to be well prepared and make sure they’re on top of their grades,” said Wilkins.

Brynne Coleman, a member of the Humber women’s volleyball team was approached to be a mentor this year and said that she took the opportunity because she knows first-hand how hard it can be.

Coleman also said that this program not only helps the students but also acts as a reminder for the mentors to stay on top of their work.

“It’s pretty ironic, because here you are preaching one thing to the students but then you’re also reminding yourself about things you should be doing. You can’t just tell them to do something and then not do it yourself,” said Coleman

She explained her first year was difficult to balance and she often found herself being “lazy” and that it was hard to balance work and social activities too.

Haan also said that the goal is to expand and offer this additional support to all first-year students and at-risk students in the years to come.

Francesco Lo Presti Is a Third Year Media Studies student. Has a passion for soccer and hopes to have his own sports talk show in the future. 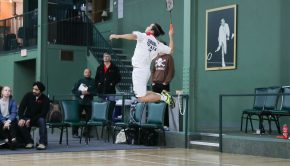 Humber Athletics: Taking Athletes to the Next Level →