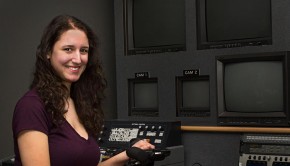 Journalism students at the University of Guelph-Humber are getting creative in the studio, developing their broadcasting and videography skills with