A look at the life and times of Robert Chin. A comic store owner who's still smiling after 30 years in the business 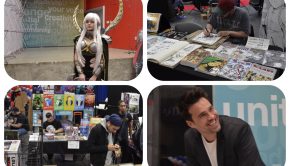 Student excitement for Ignite's Comic Expo, begs the question of why neither Humber campus has a comics club.

BRITANY MURPHY Superheroes are as relevant to today’s generation, as they always were In a world of superheroes on paper